It was about ten months ago that my sister Kristen and I were in México City making a donation of medical supplies to a Hospital Infantil Federico Gomez. During that visit we were moved by the long line of people waiting to be seen that stretched down the street. We also learned about their need for medical IDs and made a mental note to return as soon as possible for another donation.

This time, we arrived with limited time and headed to the hospital directly from the airport. Security at that hospital is tight. We needed to have been announced by people on the inside, have our donation inspected, have our pictures taken, leave laptops at the front, and be escorted in by the person receiving us. In addition to the donation, we also had our personal luggage that they did not inspect. 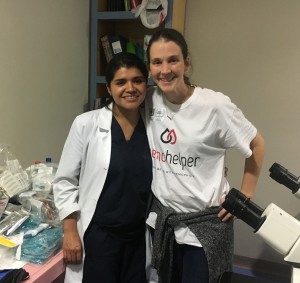 Our contact for this occasion, Dr. Ana Isabel Toala Fernandez, led us deep into the hospital until we arrived at the pediatric hemophilia unit. She was gracious and kind as we unloaded a suitcase full of supplies and shiny new medical IDs engraved in Spanish that would be delivered to the children at an event planned on December 19th. They promised to send us pictures of the event, so look for those in the near future. Ana hugged me as we said good-bye, then we left, our load a bit lighter, to exit the hospital.

To leave the hospital, one must go out a different door than the entrance. At that checkpoint, the laptop was returned, but our extra luggage was suspect. In the end, they let us go because the entrance security people hadn’t inspected our luggage, so the exit security workers were forced to trust that we hadn’t stolen anything.

The next morning we had arranged to meet with Miguel Izquierdo, the President of the Directive Board of the Mexican Federation of Hemophilia so that we could give part of our donation to his organization and do an interview with him for our HemoStories podcast. It was such an interesting and informative interview, by the way. I learned so much about hemophilia in México! Including the fact that the hospital where we donated in known for servicing those in great need who have little money, so it made me feel even better about the donation. 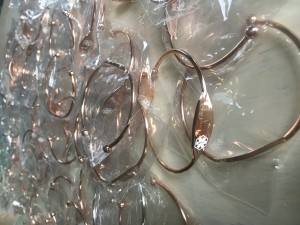 All in all, the trip went exceptionally well. We were able to accomplish everything we hoped for in the space of just two days. We faced stressful obstacles like delayed flights, delays going through customs, tricky connections, and traffic delays in México City. So many details had to work out in order for us to able to make this a truly successful donation trip. I’m so grateful that it happened. Sharing this experience with my sister was an added bonus. Cheers, HemoHelper. Thank you for this beautiful opportunity!

Have a hemophilia story to tell? Whether you are a hemophiliac, or you know someone with a bleeding disorder, we would love to hear…