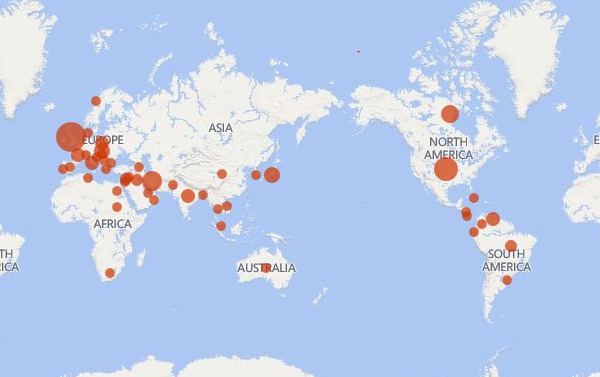 Where are all the people with Factor I deficiencies?

Have you ever wondered where other people with bleeding disorders live? This map shows us where people diagnosed with Factor I deficiencies (also known as: fibrinogen deficiencies) are living.
Factor I is an integral part of creating the fibrin mesh, created in the final phase of coagulation. To learn more about factor I deficiencies, symptoms, testing, and treatment, click here. Inherited fibrinogen disorders include afibrinogenemia (a complete lack of fibrinogen), hypofibrinogenemia (reduced levels of fibrinogen), and dysfibrinogenemia (presence of dysfunctional fibrinogen. It is also possible to have hypodysfibrinogenemia.
Of the countries that participated in the survey, the United Kingdom had the most reported cases, with 175 cases. Many countries reported no cases. Vietnam, Thailand, Serbia, Bangladesh, Costa Rica, Cuba, Denmark, and Ecuador all report 1 case.
Many developing nations don’t have the infrastructure in place to report on bleeding disorder statistics, or to diagnose disorders this rare. It is also such an uncommon deficiency that it is likely highly underreported even in developed countries.
Sources:
World Federation of Hemophilia Global Survey 2010
http://themedicalbiochemistrypage.org/blood-coagulation.php#fibrin
https://www.hemophilia.org/Bleeding-Disorders/Types-of-Bleeding-Disorders/Other-Factor-Deficiencies/Factor-I
fibrinogeninfographicinfographicsmedicalid