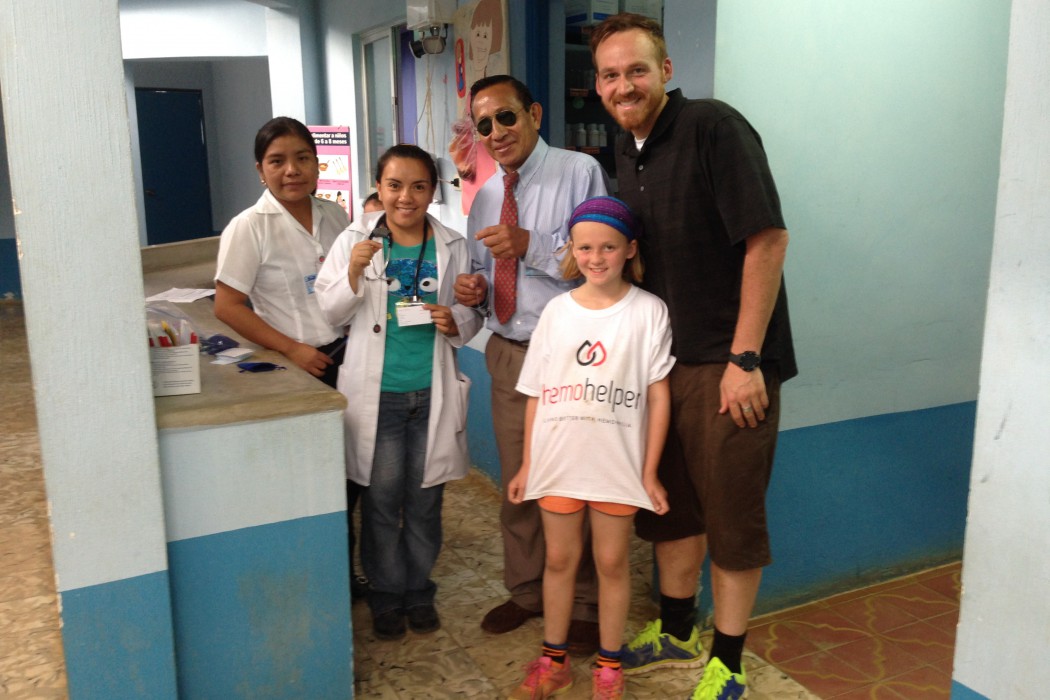 Many people who suffer from bleeding disorders in the developing world have limited or no access to regular medical treatment, often due to the high costs of treating bleeding disorders, proximity to care, and education. In fact, it is estimated that thousands all over the world are undiagnosed, and are forced to deal with bleeds, nerve and joint damage, and severe pain on their own. One estimate sites 400,000* people in the world today living with some type of bleeding disorder, with about 75% of those people receiving inadequate to no care at all.

In an effort to fulfill the humanitarian aspect of HemoHelper’s mission, Adam Smith and his 8 year old daughter, Olivia, traveled to Guatemala to launch the first international outreach endeavor. They arrived in Guatemala City on June 26, 2014 equipped with hundreds of medical ID cards, a supply of medical ID necklaces that were engraved with the words, “Trastorno Hemorragico” (Spanish for Bleeding Disorder), and HemoHelper T-shirts.

The concept behind the HemoHelper effort in Guatemala was to provide a means by which those with bleeding disorders could be identified in the case of an emergency. A potentially life-saving effort, that required no medical experience by the volunteers.

The necklaces were generously donated by a company called Lauren’s Hope (http://www.laurenshope.com/). We were impressed by their website, the look of their products, and their friendly manner. They were happy to help with our project and kindly donated 20 necklaces, each with their own small blue velvet bag.

The Hemohelper t-shirts were made by rushordertees.com in order to accomodate a very tight schedule. We were pleased with their efficiency in getting the t-shirts to use in a timely manner. Not only that, but the t-shirts were just right. They delivered exactly what we asked for.

Once Adam and Olivia had all of the supplies, they headed off to Guatemala city. From there, they traveled to a remote village called Senahu, which was about eight hours north of Guatemala City. It was there that the father-daughter team worked with a group called Family Humanitarian Experience to clean out an area of the hospital in preparation for a new neo-natal clinic. They assisted in mixing and laying cement for new flooring, and cleared out thousands of pounds of unusable, aging medical equipment. 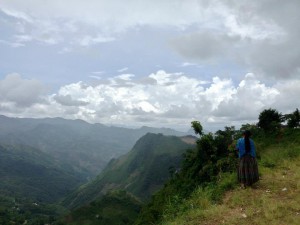 Adam and Olivia were to leave the HemoHelper donations where they would be most needed by Guatemalans who are suffering from any type of bleeding disorder. After considering a number of hospitals and clinics, the clinic in Senahu was selected as the ideal place due to the large and remote area of northern Guatemala that the clinic serviced.

They had the opportunity to meet with workers from the health clinic where the donated medical ID cards and necklaces were gratefully received. Olivia observed that, “They all wanted to learn more about HemoHelper, and they shook our hands and said thank you for coming to this hospital and helping”.

HemoHelper is confident that this small effort in this remote region of Guatemala will serve many in need. Adam noted that, “ these necklaces and cards will help serve as persistent visual reminders that special care needs to be taken with those with hemophilia. In the case of an emergency, we hope they will communicate to the first responders that immediate and proper medical care is critical.”

Adam and Olivia have plans to return to Guatemala next year to follow up with the clinic, to see how the medical ID cards and necklaces have been used, and to re-stock the supplies if needed.

So, HemoHelper’s first humanitarian effort was a success! Be on the look out for more to follow in the future.

Finally, if you are interested in doing something similar to what Adam and Olivia did and you have an international trip planned, please don’t hesitate to contact us so that we can help you organize a similar effort where you are going. The process is pretty simple, and the payoff is priceless!